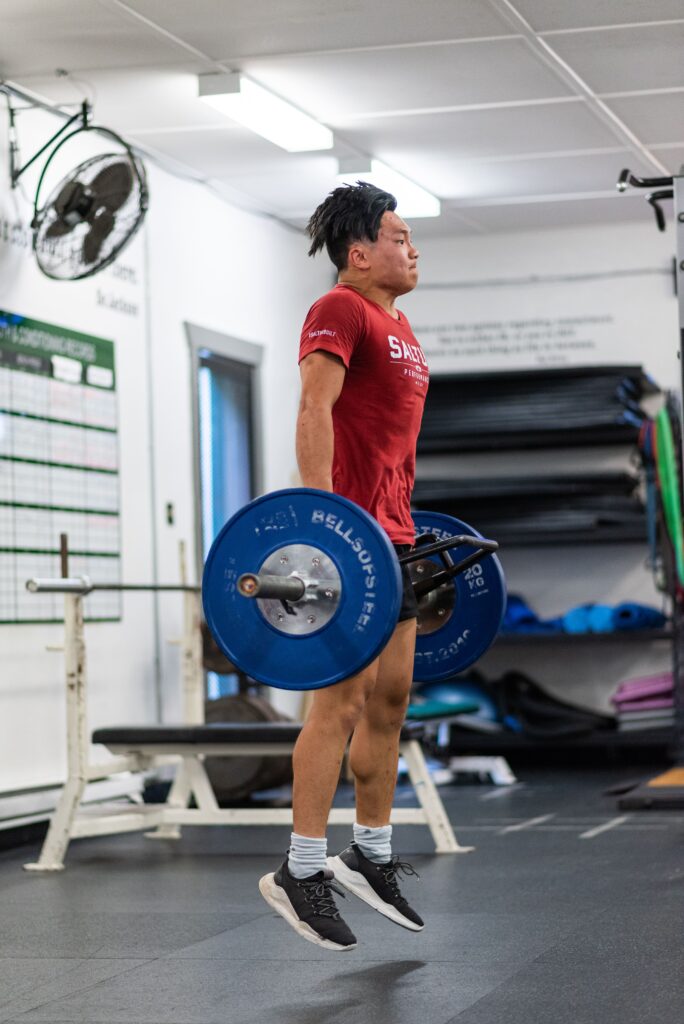 In the previous blog, we went through the basics of Olympic lifts and loaded jumps. We discussed the benefits of each and the impacts on performance, some of these are listed below:

‘Research also goes on to describe a benefit of the Olympic lifts to increase neural adaptation such as the rate of force development, motor unit recruitment, and synchronization of the motor units (English, N., 2018 and Feher et al., 2017.). Furthermore, posture and trunk stability will be key throughout the movement to ensure that neural adaptations can occur.’

‘It is often thought and proven there is a strong correlation between the Olympic lifts and improved performance through sprint times and vertical jump results. Research by Baker & Nance in 1999 found a relationship between hang power cleans and 10m and 40m sprint times.’

‘From a performance perspective, multiple studies have shown traditional loaded barbell jump squat (BBJS) has been shown to be significantly related to sprint acceleration and measures of lower-body power output (Sleivert G & Taingahue M, 2004., and Young, 2006). Further research by Koeford found after 6 weeks of loaded squat jump training performance at various loads can improve peak power output by around 12% in a countermovement jump.’

As with every exercise, understanding the physical adaptations we are trying to elicit takes priority and while both Olympic lifts and loaded jumps promote similar characteristics, there are certain stimulus Olympic lifts can provide that loaded jumps cannot. The complex pattern of the Olympic lifts challenges athletes to coordinate their limbs through hip extension and knee extension multiple times and hip extension and hip flexion. This is not only an important aspect due to how an athlete is able to generate power but also how athletes are able to control and direct power in the sporting arena. The benefit of Olympic lifts is that it allows athletes to execute these movements at load and at pace resulting in a greater transfer to performance.

But the challenge of this movement is the time for an athlete to learn and master and the coach’s ability to elicit the physical adaptations. In smaller group training, as such in private facilities, where coach to athlete ratio is typically 5:1 or less this can easily be achieved, but in larger organizations, this can be very much a challenge but can be overcome through experience.

On the other hand, loaded jumps are a great deal easier to learn, master and coach which in turn elicits a greater response from the athlete and a faster return on investment for their performance. But there are several factors that need to be considered and not necessarily the case or simple to programme these for athletes and let them go wild. To begin with, intensity, as with every lift, will affect the outcome and desired response. Ensuring athletes are attacking every rep with 100% intensity will achieve this but at times athletes will tend to coast, educating athletes and creating buy-in will overcome this. Consistency with movement can also play a role in the physiological outcomes. For example countermovement depth, countermovement duration, duration of the pause at bottom of countermovement and ankle, knee or hip flexion during the flight phase. As with Olympic lifts, ensuring athletes have a solid foundation first is key and able to successfully complete the fundamental movement patterns.

Overall, loaded jumps offer the greatest return on investment from a learning and implementing perspective to achieving the desired outcomes. But that doesn’t necessarily mean that Olympic lifts should be thrown out. In the right place, at the right time and the impact from a coordinative standpoint, they do offer a little more than loaded jumps.

The final step looks at how and when to implement either loaded jumps and/or Olympic lifts. As mentioned every athlete should have a solid foundation and understanding of the basic lifts before exposing to either exercise, which in part plays a role in the athlete’s training history e.g. how many years they have spent in the weight room. The athlete’s needs, physical limitations and sports demands should also be taken into consideration before the time of year e.g. off-season, pre-season or in-season etc.

A final consideration comes down to coaching philosophy and principles. As with many other industries, within the strength and conditioning world, there are many different opinions, views and methods of training and coaching. Olympic lifts and loaded jumps would fit differently into different training methods depending on each coach’s bias.